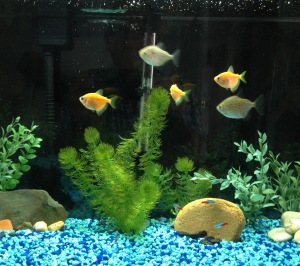 As I stumbled around my bedroom getting ready for work, I had no clue that inspiration was about to spring on me. I placed my wife’s coffee on her nightstand as a beeping alarm clock roused her from sleep. Being thoughtful, I shuffled across the floor to her aquarium thinking its light would be easier on sleepy eyes. The instant the tank flooded with light the epiphany came. I felt the need to write about fish. What? I questioned the thought immediately wondering what writing about fish swimming in an aquarium had to do with anything other than lowering someone’s blood pressure.

Immediately, I concluded two things. This thought had nothing to do with work since I am not a commercial fisherman, nor was it about food, because I don’t normally think of ordering a fish fry immediately after eating breakfast. I left the house confused.

I arrived at work and began making my way through the building. Robotically, I turned on a light to illuminate the corridor I had walked down a thousand times. On my left I noticed an expanse of blue paper hanging on the wall. Pasted on the paper was an assortment of hand-colored fish straight out of a coloring book. I wondered how long it had been there.  Another light revealed more fish. Hmmm.

I made my way to my desk. Certainly a cup of coffee would help me think more clearly. I retrieved my thermos and a nearby coffee mug and placed both items on my desk. I flicked on the overhead light and sank into my chair already anticipating the positive effect pouring hot black liquid down my throat would have. As I reached for my cup, I noticed a card lying on the desk beside it. Believe it or not it was a subscription card to the “In-Fisherman” magazine. My immediate thought was, you’ve have got to be kidding me. I seemed to have just experienced a three-fold affirmation to write about fish. Since I subscribe to the belief in a Divine Being who works in all areas of my life, I resolved to give the subject matter a bit of serious thought.

I reflected on what I had to work with. All three instances involved fish-related subject matter already present in the darkness and appeared visibly when I turned on a light. I spent the rest of the morning physically working on maintenance projects while my mind tried to determine what direction to take this project.

I began by tapping into my earliest memories of fish or fishing. Several hours later I had a shirt pocket stuffed full of notes written on paper scraps spanning six decades. Here’s what I came up with.

During the first ten years or so of my life, going fishing with my dad would definitely make the highlight reel. Our family began taking vacations to Canada about that time. Somehow my parents managed to get in touch with a farmer who rented out a pair of cottages on a private lake. My most special memory while staying in one of those cabins involved Dad taking me out fishing early in the morning before my brothers and sister woke up. One thing became apparent during these outings; Dad could fish for hours even if the fish weren’t biting. Like any kid, I had a limited attention span so I had to find ways to fight off boredom if I wanted my imagined exclusive fishing rights with Dad to continue.

The following is a vivid memory of one of those periods of boredom. It was late morning, I had already finished my peanut butter and jelly sandwich but my stomach continued to growl. I remember boredom biting me as I sat in the front seat of a small aluminum rowboat we were fishing out of. I decided to make a game out of leaning over the side of the boat and trying to get my face as close to the water as possible. My father was oblivious to this folly as he occupied the middle seat and had his back to me.

It was hard leaning over the side with a faded orange lifejacket on but I somehow found a way to do it. I added interest to the game by grabbing my fishing pole and dangling a lure in the water close to my face. I used the same green rubber frog I fished with all morning without success. That was probably the reason I got bored in the first place. 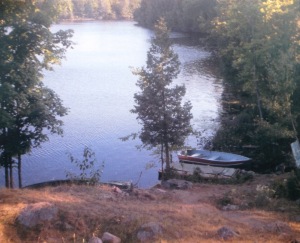 The frog appeared lifelike as I manipulated it with the fishing rod. I stared into the dark water as I played. I was not holding my fishing rod properly when a pair of ghostly eyes bracketing a large gaping mouth full of teeth ascended out of the darkness and inhaled the rubber frog as it bobbed just below the surface less than a couple feet from my face. Immediately, the mammoth northern pike disappeared back into the blackness without the slightest splash.

I thought I imagined the whole thing until the fishing pole I held pinched my hand against the side of the boat responding to the strike by the fish. The reel made that grating sound it makes whenever line is being pulled off it. Holding the poll now with both hands, I tried to stand up. The boat rocked wildly. I almost fell overboard as I yanked my pole upwards to set the hook. From behind me I could hear my father yelling, “sit down!”

His words did nothing to quell my excitement, however, as I watched the tip of my pole bend down into the water. The fish swam away from the boat taking fishing line with it and I could do nothing to stop it. Dad got excited when he saw what was happening. He spun around quickly to face me.

“Don’t pull to hard, you might snap the line,” he replied.

The fish suddenly stopped moving away. My line, taunt as a guitar string, felt as if I had the anchor tied to it.

My father never attempted to take the fishing pole from me; he concentrated instead on offering me encouragement. He decided to row the boat towards the fish to take some of the pressure off the line. We left the middle of the cove overrun with lily pads and edged closer to a rocky bank that tumbled into the lake.

“Reel in some line and take up the slack,” Dad said. “Keep some tension on the line.”

He stopped rowing when the fishing line ran straight down into the water. The only evidence that something was still on my line was an occasional heavy tug against the thin strand of monofilament fishing line. We had reached a stand off. The fish wasn’t moving and I couldn’t make it move.

“Billy, he may have wrapped himself around something on the bottom,” Dad offered.

“Dear God, please don’t let this line break,” I prayed out loud as only a child could.