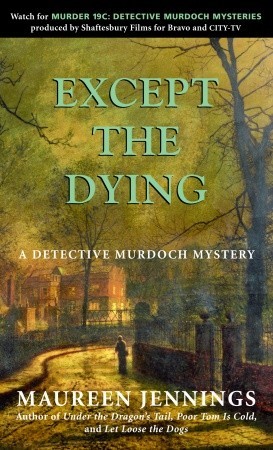 Goodreads asked how many books I planned to read in 2019.  I said I would read 10.  Here is the first one : Except the Dying.  It’s the first book in a series of murder mysteries by Maureen Jennings set in the 1890’s in Toronto.  I became interested in the author because of the wildly popular “Murdoch Mysteries” television series, which I can’t seem to get enough of.  Except the Dying was the title of the first TV episode.

Except the Dying is Jennings debut novel and it’s a good one.  She takes her time revealing subtle clues linking the reader to the detective as the story unfolds. Having watched five seasons of “Murdoch Mysteries,”  I was already familiar with the lead characters Detective Murdoch, Constable Crabtree and Inspector Brackenreid of Toronto’s 4th Constabulary police.  For me, part of the appeal of the book and the show is getting a feel for the turn of the century way of life and the language used.

The story begins with the discover of a murdered young women in her late teens who turns out to be with child.  Who was she?  Once the women is identified, the list of suspects begins to pile up.  The murderer is not revealed until the end with surprise ending.  A very good read indeed.