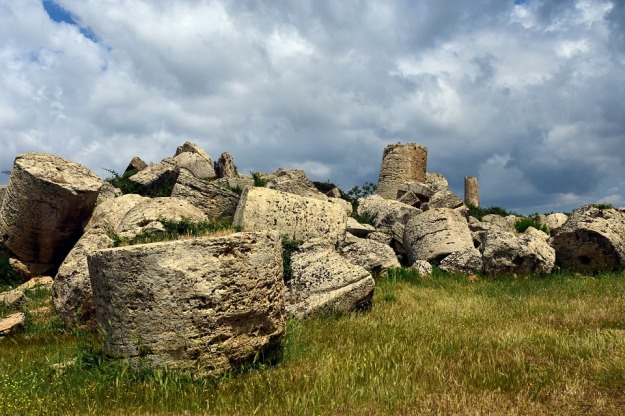 The gates to Jericho were closed. No one could get in or go out. Jericho’s massive walls towered over the entrance to the Promised Land. The people of Israel looked at the situation, realizing the hopelessness of it.  Contrary to the song I sang as a child, God, not Joshua fought the battle of Jericho.

“And the Lord said to Joshua, See, I have given into your hands Jericho with its king and all its men of war.” Joshua 6:2

The people circled the city daily in silence as instructed by God, carrying the Ark of the Covenant before them. On the seventh day the people blew horns and shouted.  Who would believe the massive walls of the city could simply fall down unless they were there to witness it. Have you ever wondered what the people shouted? Perhaps it was hallelujah, which in Hebrew means a joyous praise; to boast in God.

Rahab and her family were the only ones spared from destruction. The plunder of the fallen city was dedicated to God. Could the people resist putting some of the glittering silver and gold lying among the stones into their pockets?  (Stay tuned for the answer.)

Spiritually speaking, we build evil fortresses like Jericho in our hearts. We wall off certain areas of our lives we wish to protect from God’s control. Only after these fortresses fall can abundant life be experienced. Freedom comes with letting go, not reinforcing our fortresses.