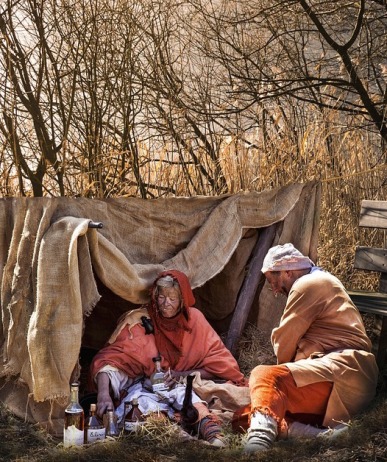 Chapter nine of Joshua features the people of Gibeon.  The Israelites have miraculously crossed the Jordan River on dry land and defeated Jericho and Ai.  Word of the mighty works of God (v9) spread to the surrounding Canaanite towns.  A call went out for the Canaanites to set aside their differences and unite militarily.  The Gibeonites ignored the call, fearing they would be the next ones to be wiped out (v24).  They came up with a ruse intending to secure a peace treaty with the Israelites.

The Gibeonites offer convincing proof that they are from a far off land showing the Israelites their moldy bread, old wine, worn out clothes as proof.  “We have traveled far,” they said.  The Israelites fell for the ruse and swore an oath.  Unknowingly they made a peace treaty with their neighbors.

God was never consulted before they swore an oath to strangers?  When the ruse was exposed, the Gibeonites were not killed but subjected to a life of servitude carrying water and cutting wood in tabernacle service.

How many of us have resorted to a ruse as a means to avoid trouble.  Ruses often become yokes, which we are forced to bear indefinitely.  What is to be gained with a lie draped around one’s neck?