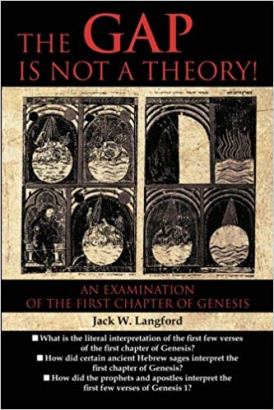 Occasionally I read a book to satisfy my curiosity or learn something more about a particular subject that interests me.  This is one of those great and informative reads.  The Gap is not a Theory! by Jack W. Langford seeks to tackle the issue of a possible time gap found in the opening chapter in the book of Genesis.  For the longest time I have suspected that those who claim the universe is billions of years old and those who believe the earth as we know it is only thousands of years old could both be right.  There are scientific measurements supporting both claims.

In this book the author lays out the case the heavens and earth were created (Genesis 1:1) long before the six day creation account beginning in Genesis 1:3.  The earth at some point in its past “became” formless and void (Genesis 1:2) as the result of a judgment of some kind.  It is proposed this judgment had to do with the fall of Lucifer (Satan).  I found this to be a fascinating study supported by scripture.  At times the discussion of scripture translations from the original Hebrew became laborious to read but the result was rewarding nonetheless.  Langford includes other arguments both for and against the Genesis gap.

I came away from this read with my faith strengthened and deepened.  It is reassuring to know that the Holy Scriptures are still relevant and in harmony the discoveries of modern science.