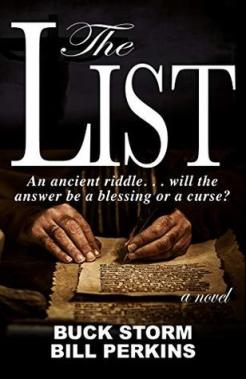 The List, by Buck Storm and Bill Perkins is one of the best books I’ve read in a long time.  The novel falls into the Christian fiction genre and captures the essence of what life must have been like in Israel under Roman occupation at the time of Christ.

The storyline follows the lives of Joseph of Arimathea (a Saducee) and Nicodemus (a Pharisee), both of whom were part of the Jewish religious council called the Sanhedrin. The unlikely pair become friends and secretly set out to prove/disprove that Jesus of Nazareth is the promised Messiah.  They accomplish this by creating a list of prophecies Messiah must fulfill.

My favorite part of the book was how the authors  managed to capture the tension between the people’s love for Jesus and the religious leader’s loathing of him.   A must read for people of faith. I was excited to learn there will be a sequel.